The city of Cape Town is home to a big underground network of tunnels that date back to the 17th century. These tunnels were built to divert spring water into the ocean, but as the city grew these tunnels got built over. The good news is that you can go on a historical tour of the tunnels and see what’s left of them. Although most people think that you can only play golf during the day, the Mother City offers a place where you can play golf at night with the help of Glo Pro SA’s glow-in-the-dark neon lighting. This family-friendly activity attracts many people and is open to all levels of experience. Keep in mind that locations for this activity often change and the price is around R300. Did you know that the Atlantic Ocean is the perfect destination for African Penguins? Head out to Boulder’s Beach in Cape Town to see a colony of these adorable creatures. Taking photographs is allowed, so you will probably have your Instagram account full of likes after you post a couple of photos from the Boulder’s Beach. This is one of the first trampoline parks in South Africa and it allows you to jump as much as you want in an environment which is safe and suites all ages. Rush Trampoline Park is quite big and features around 17,000sq.ft of trampolines, several basketball lanes, dodgeball courts, battle beam, and two trampoline lines that are ideal for doing flips. One hour at the Rush Trampoline Park will cost you R115. 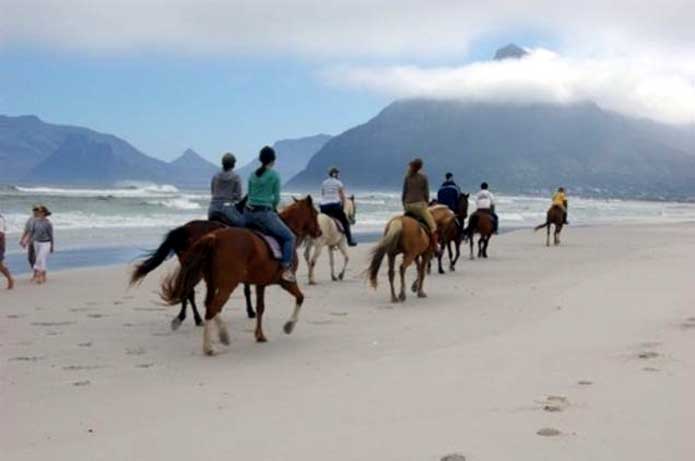 Noordhoek is one of the longest beaches in the Mother City and it’s no wonder that horseback riding is one of the most popular experiences inclusive to Cape Town. Make a booking with one of the schools in the area and enjoy spectacular views of Chapman’s Peak while riding a horse along the water’s edge.

6 Pay a Visit to the Springbok Experience Rugby Museum In case you are interested in learning about the history of South Africa’s most popular sport, head out to the Springbok Experience Rugby Museum and see why Capetonians are crazy about rugby. You will have a chance to hear about the origins of the sport and test your rugby skills in the interactive game zone. Located close to the Rhodes Memorial at the University of the Mother City, this abandoned piece of land used to be a Zoo from 1931 to 1975. Although the Zoo is not functional these days, travelers can explore the remains of cages and other interesting relics.

8 Explore the Spier’s Vineyards with a Segway One of the best ways to see the Spier wine farm is on a Segway. Book a Segway tour with the local operator to see some the lesser known parts of this farm which is 300 years old. Those who participate will have a chance to see the organic agricultural method used by the winery. R250 per person is the price for the one-hour tour, while the two-hour option will cost you R400 per person and includes free wine tasting. Make sure to book a Segway tour of the Spier’s Vineyards in advance.

9 Take a Cooking Lesson in Bo-Kaap For one of the most unique experiences exclusive to Cape Town, go to Bo-Kaap and take a cooking lesson from the locals. Learn how to prepare authentic Cape Malay dishes and explore the most colorful neighborhood in the city.

10 Watch the Sun Dip below the Horizon from Signal Hill South Africa’s Mother City is home to dozens of places that offer amazing sunset views, but nothing beats Signal Hill. Travelers can pack a picnic basket and make a real adventure out of this great experience. Keep in mind that Signal Hill is the most popular spot for sunset views, so don’t expect to have the lion’s rump all for yourself. Located in Gugulethu, Mzoli’s is an open-air shack restaurant that specializes in South African barbeque also known as shisa nyama. Purchase the meat from the attached butchery and have the Mzoli’s staff marinade and grill the meat for you. Forget about the plates, as meat here is served inside big enamel bowls. Live music performances are held in the evenings.

12 Get on a Fatbike and Ride along Gansbaai’s Coastline In case you were thinking about cycling along the sand dunes and the beaches, book a Fatbike Tour and explore the Gansbaai’s coastline on this distinct two-wheeler. Basically, fat bikes are bicycles with low-pressure tires that are wide and slide easily over the beach.  The tour lasts for about 3 hours and costs around R600. Keep in mind that you need to be taller than one meter and a half, have less than 120kg, and be at least 16 years old to be able to go on a Fatbike Tour.

13 Sandboarding in Betty’s Bay or Atlantis Besides being well-known for its pleasant climate and great beaches, South Africa’s Cape Town also witnesses a lot of wind and there are many sand dunes around the Cape Peninsula. Of course, some people have made use of this and they have come up with sandboarding tours in Betty’s Bay and Atlantis. Go down a 35-meter tall sand dune and have an unforgettable experience in Cape Town.

14 See a Movie at the Galileo Open Air Cinema There are several cinemas in Cape Town, but Galileo Open Air Cinema is the only place where you can watch a movie under the stars while being surrounded by the beautiful scenery of Cape Town. This outdoor venue is an ideal destination for an amazing night on a warm summer evening.

15 Reach the Top of Table Mountain with a Cable Car The best way to see one of the most famous landmarks in Cape Town is by taking a ride in a cable car. Go to the top of Table Mountain and admire the amazing views of the entire city. Table Mountain stands at 1085 meters, so it’s also possible to climb to the top of the mountain in a few hours.