It’s iconic … and it’s now been confirmed!  Table Mountain, Cape Town, South Africa is officially one of the worlds 7 wonders of nature. 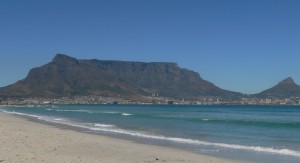 The mountain has stood the test of time; cradling the city and becoming a landmark of considerable distinction for sailors coming into the bay to shelter from the prevailing winds for many centuries.  It is fitting that it has now become a World treasure, not just a South African one.

A visit to Cape Town would not be complete without an ascent to the top, either by panoramic, revolving cablecar or by trekking up the stunning gullies that make up the walks around and to the top.

One of the facts that is most often overlooked by visitors is that the mountain is a chain that reaches right down to the Cape of Good Hope as part of the Table Mountain National Park, encompassing Signal Hill, the Atlantic Ocean coastline on one side and the Indian Ocean coastline on the other.

The park is a magnificent blend of flora and fauna, rich, varied and unique and extraordinary in that it thrives within the metropolitan city of Cape Town and its environs.

History litters the park, even as far back as the Stone Age, as successions of people harvested food from the sea and hunted through the forests.  The sheltered slopes were fertile and it must have seemed like heaven to travelers to come upon this glorious place.

It is amazing to think that unique species of both plant and animal life exist on the mountain.  The most common animal is a Rock Hyrax or Dassie as it is better known. 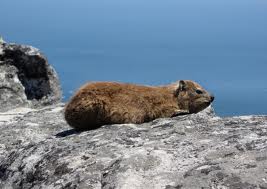 Dassie on the Mountain

Rather like a huge guinea pig with a grey brown, rock coloured coat, this timid creature is quite often seen close to the upper cable station and restaurant area, cleverly working out that food is available for quick, easy pickings when dropped (inadvertently, as you are not legally allowed to feed them) by tourists.

Porcupines, mongoose, snakes and tortoise make up other animals you might get a peek at, but they are rare and you would have to count yourself very lucky!

The flowers and plant life are estimated to be over 2000 species that are only found on Table Mountain, including a number of proteas, the national flower of South Africa.  To put this in some perspective this is more than the total of species found in the whole of the United Kingdom!

Ascending the mountain today is easy.  Take the ultra modern cable car that very gently spins, showing you the full vista of the city spread out beneath you, no matter where you are standing within the car.  It is an experience you will treasure forever, as reaching the top feels like you are standing on top of the world.  Gaze down to Cape Point, pick out the afternoon beach spot, review tomorrow’s tour to the winelands.  If you choose to take the Sunset Special, you can combine sundowners and a meal while you pick out the Mensa constellation.  Table Mountain is the only earthly thing to have given its name to a group of stars.  Mensa, meaning “The Table”.

For more great ideas on what to do and see, ComeToCapeTown.com will be delighted to assist you in making the most of your vacation and holiday time.

Luxury accommodation, top tours and sights to see, we are your one-shop information stop for the best rates around.  Be our guests, Contact Us Now and start planning your own memories!

About The Author: Helen