Cape Town is home to some of the most beautiful, vibrant and trendy neighbourhoods in the world. Each of which has something unique and exciting to offer. But which Mother City neighbourhood lives up to all the praise they’re getting? 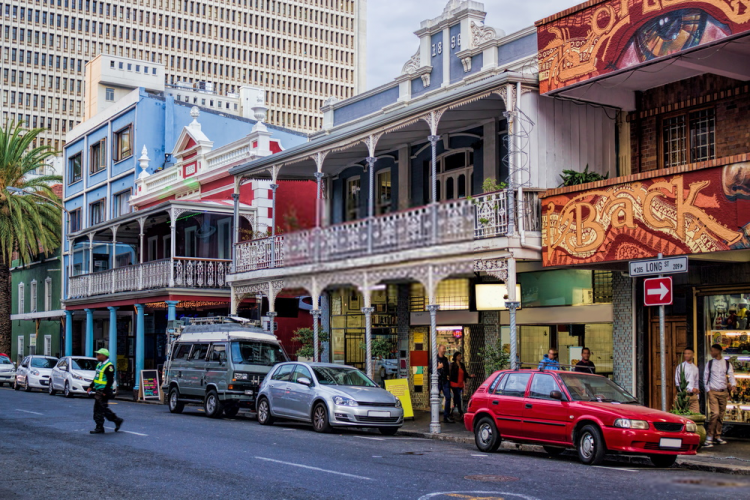 Here are Cape Town neighbourhoods that actually live up to the hype and are definitely every second worth exploring.

Besides the celebration of colour and mix of Cape Dutch and Georgian architecture that line the steeply cobble-stoned streets, the beloved Bo-Kaap is also known as the centre point of Cape Malay culture in the Mother City. This has given rise to authentic Cape Malay cuisine that has foodies from all around the world flocking to this iconic Cape Town neighbourhood to taste its unique flavours and dishes.

Bo-Kaap is also home to the Bo-Kaap Museum, the first established Muslim mosque in South Africa, the Auwal Mosque and the Diamond Gallery, one of the largest diamond wholesalers in South Africa, to mention just a few of its gems. Its therefore safe to say that Bo-Kaap is one Cape Town neighbourhood that lives up to the hype and so much more.

Green Point is aptly known as the Soho of Cape Town thanks to its vibrant nightlife scene, cool restaurants, hip hangouts and trendy coffee shops. But besides great places to drink and eat, there is so much more to this Cape Town neighbourhood. Besides its trendy status, Green Point also boasts beautiful surroundings, a prime location and close proximity to the beach.

The fact that Green Point is located so close to a variety of Cape Town’s most exciting attractions and landmarks, means it’s also become the ultimate mecca for adventure-seekers and active lifestyle pursuits. The Green Point Urban Park is merely one such natural gem that’s located right there in the heart of the urban jungle. It’s all this and more that makes the vibrant Green Point one of Cape Town’s coolest neighbourhoods.

Situated right on the slopes of Lions Head and Signal Hill, Tamboerskloof has fast become one of Cape Town’s most sought after neighbourhoods. Boasting an extensive variety of hip hangouts, cool bars and trendy restaurants, it has become the place to be for a day or night out on the town. Home to the vibrant Kloof Street, lined with an incredible selection of restaurants, bars, art galleries, cafes, artisan bakeries and coffee shops, its no surprise its become one of the most visited neighbourhoods in Cape Town.

Apart from its trend-setting status, Tamboerskloof is also one of the oldest residential suburbs in Cape Town. Home to a variety of beautiful Victorian-style homes that lie side-by-side showcasing a cool art deco vibe and an eclectic mix of architectural styles, this Cape Town neighbourhood has become quite an architectural wonder to explore. The fact that Table Mountain, Lions Head and Signal Hill are all right within reach, makes Tamboerskloof the perfect place for any nature lover or adventure seeker.

Recently named one of the coolest neighbourhoods in the world by Forbes, this trendy seaside town is undoubtedly one Cape Town neighbourhood that lives up to all the hype. A real gem of the vibrant False Bay coastline, the ocean-front fishing village of Kalk Bay is jam-packed with tons of cool hidden gems, secret spots and cool quirks you won’t quite find anywhere else.

Home to a variety of trendy street-lined shops, quaint cafes, stunning beachfront restaurants, unique coffee shops, arty craft shops and so much more, you can easily spend a full day exploring the streets of Kalk Bay. Located just around the corner from Simonstown and Boulders Beach, home to Cape Town’s beloved African Penguin colony, as well as a variety of caves and hiking trails, Kalk Bay is the ideal destination for outdoor exploring and adventuring. Not to mention the fact that it has become a fan-favourite surfing spot among locals and travellers alike. Thereby making the cool Cape Town neighbourhood of Kalk Bay the whole package.

The leafy and lush greenery of Newlands has undoubtedly made it one of the most sought-after neighbourhoods in Cape Town. Home to a range of high-end properties and architectural wonders, it’s known to attract the who’s who of Cape Town. Located at the foot of Table Mountain and home to the Newlands Forest incorporated within the Table Mountain National Park as well as the world-renowned Kirstenbosch National Botanical Gardens, Newlands has established itself as one of the most beautiful neighbourhoods in Cape Town.

Boasting lush natural surroundings and stunning natural gems, Newlands has also become a must-visit destination for hikers, adventure lovers or anyone looking to experience the outdoors. Besides its unapologetic natural beauty, Newlands is also home to a variety of village-style shopping centres, steakhouses, bars, restaurants and of course the iconic Newlands Stadium. The 51 000-seater Newlands Stadium is one of the grand old dames of rugby in this country and the second oldest rugby stadium in the world.

A post shared by bronwen girardi (@wildflowertimberlakevillage) on Apr 19, 2018 at 8:16am PDT

The bold bohemian paradise of Observatory is another Cape Town neighbourhood that actually lives up to the hype. Located a mere 10 minutes outside of Cape Town’s city centre, the neighbourhood of Observatory is home to a melting pot of people. Home to a variety of cool thrift shops, charming street-lined cafes, quirky restaurants and laid-back hangouts, Observatory is widely known as one of the most diverse, expressive, easy-going and free-spirited neighbourhoods in Cape Town.

Observatory’s Lower Main Road has also fast become one of the coolest streets in Cape Town for artists, hippies, backpackers, students and foodies from all walks of life. And not to mention the fact that it is home to some of Cape Town’s very best graffiti murals. Thereby making it a real hotspot for art lovers too.

Known as one of the Mother City’s best kept secrets, Noordhoek is one of Cape Town’s most beautiful neighbourhoods. While it might not be as bustling as some other neighbourhoods, the stunning seaside town of Noordhoek encourages you to sit back, relax and appreciate all the natural beauty and wonder Cape Town has to offer.

Home to the picturesque Noordhoek beach, one of the most magnificent beaches in the Mother City, Noordhoek has fast become a sought-after beach destination for locals and travellers alike. In addition to this stunning showcase of natural beauty, Noordhoek has a real charismatic village feel. But while this beachy Cape Town neighbourhood might embrace the quieter side of life, don’t you dare underestimate its adventurous spirit.

Home to one of the coolest local surfing spots, the Dunes, as well as a variety of stunning hiking trails and exciting attractions including Hout Bay that’s just around the corner, Noordhoek is the perfect place to experience everything Cape Town has to offer.

While the hip neighbourhood of Woodstock may be one of the Mother City’s oldest suburbs, it’s also one of the trendiest. And you better believe this Cape Town neighbourhood lives up to all the hype it’s getting. Compared to New York’s Brooklyn, Woodstock is an artsy creative mecca with a touch of Cape Town grunt and has become one of the top must-visit destinations for tourists and travellers.

Boasting a vibrant, eclectic and truly inspiring mix of artistic wonders and graffitied creations, it has become the ultimate mecca for artistic souls from all around the world. Besides its thriving street art scene, Woodstock is home to a thrilling culinary scene that has been known to attract avid foodies from all walks of life.

Boasting some of the most renowned and sought-after restaurants, not only in Cape Town but the world like the Test Kitchen, the Tap Room and the Pot Luck Club, it has positioned itself as a not-to-be-missed culinary hotspot. It’s therefore no surprise that the cool neighbourhood of Woodstock has established itself as the bustling blend of food, fashion, art, and design in Cape Town.

Chilled beach vibes and cool surfing times is what the Muizenberg way of life is all about. Located approximately 20 minutes outside of Cape Town city centre along the vibrant False Bay coastline, Muizenberg has positioned itself as one of the Mother City’s coolest surfing hotspot for avid surfers and surfing first timers.

But besides all the sun, fun, surf and sand, Muizenberg is also home to a variety of cool laid-back bars, trendy hangouts and sought-after beachfront restaurants that’s known to draw quite the crowd. The fact that you can find one of the most ‘Instagrammable’ Cape Town attractions right here, the colourful Muizenberg beach huts, has made it one destination that is on everyone’s Cape Town bucket-list.

If you’re all about the action, the City Bowl and Cape Town CBD is exactly where you want to be. Cape Town’s city centre boasts a certain vibrant energy, an infectious atmosphere and electricity so palpable you can’t help but want to let loose and let the cool inner-city vibe take you where it may. With nightclubs that keep the music pumping well into the morning hours and trendy bars and cool hangout spots on just about every corner, this cool and captivating Cape Town neighbourhood has become widely known as the place to be to enjoy an unforgettable night out on the town. And not to mention its impressive line-up of renowned restaurants and up-and-coming eateries that will leave any food lover wanting more.

In addition to its trendy foodie status, it’s cool urban lifestyle, high-rise apartment buildings and re-vamped and revitalised central business district gives this Cape Town neighbourhood a cool urban edge you won’t find anywhere else. In addition, the City Bowl is also home to some of Cape Town’s top attractions like Long Street, the Greenmarket Square, the Old Town Hall, the South African Parliament Buildings, the Slave loge, St. George’s Cathedral and the Company Gardens to mention just a few. But above all its the eclectic, bustling, cosmopolitan mix that’s always-hustling, never-say-die spirit and lust for life that makes the City Bowl a true Cape Town neighbourhood that actually lives up to the hype.

Boasting a variety of trendy hangout spots, stunning beaches, exceptional restaurants and coffee shops and an endless variety of natural gems and adventure pursuits, exploring Cape Town’s most sought-after neighbourhoods is a must for anyone visiting Cape Town. Not only do they allow you to explore the Mother City in the best possible way, but immersive yourself in Cape Town’s local culture and vibrant energy.

Moving to Cape Town? We offer a wide range of  accommodation options at the best prices… guaranteed. Contact us today and let us help you plan the perfect stay that allows you to discover the best of Cape Town and everything else the city has to offer.